With all the excitement of the new BH90210 premiering this week, ECK!, I can’t stop thinking about who is missing from the excitement.

Like most,  I was beyond thrilled when they announced there would be a Beverly Hills 90210 reboot, something all the fans have been wanting for years!

I was giddy with excitement.

It was a royal letdown. The excitement for the reboot died too. I just could not get into it anymore, but now we are days away, I am looking forward to it but still not as thrilled as I was.

I was a huge fan of Beverly Hills, 90210. Yes, I know there were a ton of fans, millions of people watched the show, I was just like every other preteen/teen of the 90’s. The difference was I was obsessed.

In an era where DVR didn’t exist, I wouldn’t do anything on Wednesday (and then Thursday) night when 90210 was on or made sure it was being taped with a VHS. I never missed an episode. I went to sleep-away camp every summer and basically refused to go the 2 summers it aired. You know the season, when Brenda took the pregnancy test.

If you are not a huge fan you are likely wondering why, 90210 aired over the summer. Seasons 2 and 3 started in July and ended May in the following year. It was a brilliant move to keep people’s attention when all the other shows were on the typical hiatus.

The only way I was convinced to go to sleep-away camp, (that I loved) was because my father said he would record every episode and he did.

I was that fan. 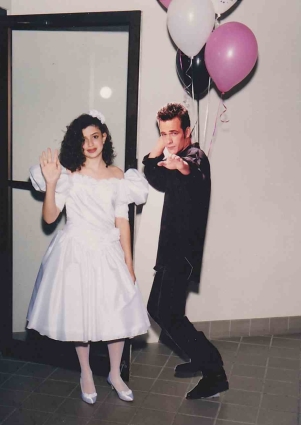 The height of Beverly Hills, 90210 popularity was when I deciding on my Bat Mitzvah theme. (Those we are not Jewish, after the Bat Mitzvah ceremony, you have a huge party similar to a Sweet 16. The party always has a fun theme.) I was in between teddy bears and Beverly Hills, 90210. I remember shopping at Panda, a popular store in our NJ neighborhood, and asking our regular sales person if she thought 90210 would still be popular in a year.

She said “yes, of course,” I screamed with excitement.

I don’t know why I thought her word was gospel but I got giddy and from that moment forward my Bat Mitzvah theme was going to be Pam’s Beverly Hills, 90210. (Yes, I went through a phase were I only wanted to be called Pam. I hated Pamela and then it switched.) 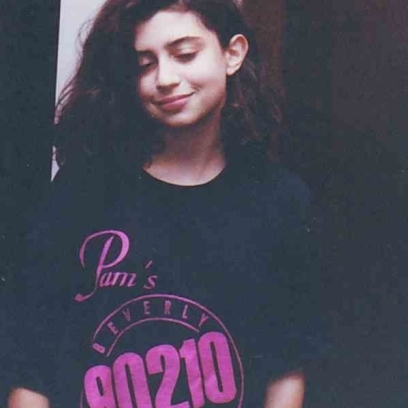 It could not have been a better theme for me — each table was a different character, the dais table (the kid’s table) was West Beverly High, there was life-sized cut-outs of the characters, the sign-in board had Brandon, Brenda with my face instead of Shannon’s, and Dylan. The t-shirts we gave as favors said, Pam’s Beverly Hills 90210 with the logo. And the best part one of the dancers with the DJ looked just like Dylan. It was amazing.

I never stopped watching. I never missed an episode, that’s what VHS were for.  I was always the biggest fan even with all the changing characters, the wonky story lines, nothing altered my love for Beverly Hills, 90210.

I was depressed when the show went off the air.

I always kept it close to my heart.

For as long as I remember I wanted to name one of my children for the iconic show but never told anyone.

I fell in love with the character a female Dylan from a short lived comedy, Good morning, Miami. The main female character was Dylan, an adorable, spunky, fierce women. I had never thought of Dylan for a female before. It could not be more perfect since I was team Dylan.

I had it picked out for years, even before I knew if I wanted children.

When I was pregnant with my first, Alex and I were constantly brainstorming baby names. In the Jewish tradition, you name your baby after someone close to you who passed away using their first initial– which was the tradition I had hoped we would follow and we did.

Alex was very close to his grandfather, Daniel.

I was internally thrilled when I knew this was going to workout. But it was not so easy. Alex loved Dani for a girl. I had to really convince him Dylan would work for a girl.

I was dead set, Dylan was the winner in my heart. Dani was cute but no Dylan.

Alex soon realized there was no winning this battle. He came around, Dylan Elizabeth was born June, 2014.

I never admitted Dylan’s name was from 90210 until Luke Perry passed away. I had told him I thought it was an adorable name, I never gave a solid reason why I wanted it (but he had a feeling). If I did, he would have insisted we name our 2nd after his favorite Star Trek character, Worf. I kept this a secrete for the well-being of Tabitha.

When the news broke of Luke Perry’s stroke, I had stopped thinking him.

Just 4 -5 days after his massive stroke it was reported he died.

I felt such incredible sadness come over me for a person I have never met but meant so much to my adolescence and early adulthood.  The feeling didn’t go away, I couldn’t stop thinking about him, his family and searching.

I always thought I would meet him at one of those conventions, tell him something funny/embarrassing (easy to do with me) and take a picture with him and my Dylan that I would cherish forever. It never got that chance. I am going to be better about living in the moment, if I see something do it. You never know if you will have that chance again.

I heard the first episode of BH90210 will be dedicated to Luke/Dylan’s untimely death. With days away from the premiere, my excitement is growing but still not where it would be. I do wish I had friends who like 90210 like I do. I would love to have a viewing party.

Will you be watching BH90210? What are you looking forward to most?

I’ve got my new BH shirt ready. Can’t wait to see where they take the storyline.

Published by Markdowns and Letdowns

Hi, I am Pamela, a mom of 2 daughter’s Dylan Elizabeth, 6 and Tabitha Yardley who is 3. I am a marketer turned SAHM. View all posts by Markdowns and Letdowns

4 thoughts on “The Death of an Icon– Luke Perry”