2018, you were an interesting year. Nothing really exciting happened like in years past;  no engagements, no marriages, no babies born, etc.

We started 2018 with a low-key New Years Eve at home with the kids, everyone but me was asleep by midnight. It was a pleasant way to start the year, the beginning of the year was good, nothing really stood out but it was going well. We were happy, no illness, both of were working, etc.

I even remember saying to Alex, “I can’t believe the year is going so well, it’s bound to take a turn.” Unlike others we know, we have had a series of good years so we were bound to have a not so great year. They can’t all be good, right?

Lesson learned, never count your eggs before they hatch. By May, I was unemployed.

Unemployment can be stressful, uneasy and emotionally draining. I lost my job and Alex was off to China for 2 weeks the very next day.

I wanted to crawl into a whole and cry. But Alex was leaving for TWO WEEKS and I had to be a mom. I put my big girl pants on, filled out my unemployment paperwork and pushed through. I began my job search. I thought I would find a job fairly quickly, 6 months later I am still looking.

The two weeks went by so as slow as you can imagine, when you are depressed, and needing to care for 2 kids. Full disclosure, I did still have our nanny part-time, so I was not with the kids all day, plus Dylan was in school. It was still hard after just loosing my job.

Alex’s business trip went so well, his company was sending him to Puerto Rico soon after his return.

I felt numb. I didn’t hear anything.

“Pamela, Pamela, Did you hear me? We are all going?”

So we were off to PR for 3 weeks. No job, nothing was keeping me in LA. I know you are all thinking — “PR for 3 weeks. Wow, that’s awful.” It wasn’t by a long shot. We enjoyed it. I loved it. We spent the majority of the time on the beach or in the pool. It was as relaxing as much as it could be with 2 kids while Alex was working. No complaints at all.

Soon after my “dream summer” everything was a whirlwind of a series of unfortunate events that happened to loved ones that effected us greatly.

Our beloved nanny who had been with us since Dylan was a baby, went home to Brazil for her sister’s wedding and was denied re-entry into the United States. She has since been banned from the country for FIVE years.

Months later, Dylan still asks for her and doesn’t fully understand what happened. Honestly, I am an adult and I don’t fully either.

Then, the Woolsey fire wiped out a good friend’s home. Alex and I happily spent a child-free day to help them sift through the rubble to find barely anything.

Worst of all, days before Christmas a friend’s husband went into cardiac arrest. Almost a month later, he is still in a coma. He is a young man in his early 40’s and the father of 3 young children. Please keep them in your thoughts.

More Letdowns than I would have hoped in one year.

While 2018, wasn’t the best year we have ever had, it was not the worst for us personally.

Yes, 2018 was a harder year than we would have liked to have but there were also some really great memories too. 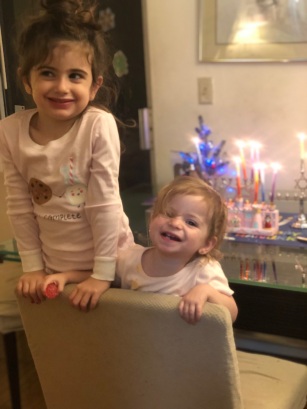 Dylan is a young lady now. She is no longer a baby, no longer a toddler. She speaks her mind (none-stop), She’s funny.  She’s girly. She loves dresses. She loves coloring. She is smart. She is her own person.

Tabitha is no longer a baby (although, I am not ready to except that). She is a full on toddler.  Her personality is shinning through. She is silly. She wants to do everything her sister does (What little sister doesn’t?). She is walking and talking. She is just too adorable for words.

My mom moved from NJ to CA in October. After years of saying she will never move, she put her condo on the market and within 2 days (literally) it was sold. She now resides about 15 miles away from us. It’s been a huge adjustment for me since I moved 9 years ago. The girls get to see her weekly which I never thought would happen. 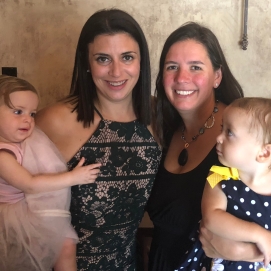 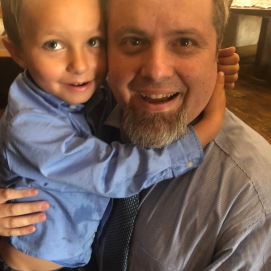 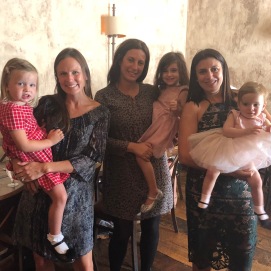 We celebrated Tabitha’s Hebrew naming in NJ, because of my mom’s move, I called it our last trip to NJ. It hopefully won’t be, but I don’t think we will be back for a long time, if not years. I do have friends and family still in NJ, with my mom gone it’s not going to be a destination for us for a while.

Finally Alex and I ended the year with entire week away from the girls. Alex’s parents offered to take the girls for the week. They really wanted to spend that time with them and I really needed a break. By mid-Dec I was snapping at everyone and everything (our cats) and seriously needed a deep breath and some silence. Alex didn’t need a break as much as me since he doesn’t see them as much. But we both really enjoyed the week. We didn’t go away. We enjoyed our pre-kids life again — Slept in, went to the movies, ate out, worked out, came and went as we pleased. We actually went out on New Year’s Eve! It was amazing.

In 2018, I learned to appreciate what you have more, do your best to live in the moment and enjoy what’s around you. 2018 really taught me life can change in an instant.

2019, I will do my best to live in the moment, put my phone away (a work in-progress) and appreciate what I have more.

Published by Markdowns and Letdowns

Hi, I am Pamela, a mom of 2 daughter’s Dylan Elizabeth, 6 and Tabitha Yardley who is 3. I am a marketer turned SAHM. View all posts by Markdowns and Letdowns